Sodium fluoride (NaF) is an inorganic salt, which is an important source of the fluoride ion for many applications. Sodium fluoride single crystal has a good transmission for more than 50% from 130nm to 13um.And the refractive index is very low. It is a simple ionic compound, made of the sodium (Na+) cation and fluoride (F-) anion. The solid salt exists as cubic crystals similar to the crystal structure of sodium chloride (NaCl). Sodium fluoride occurs in nature as the rare mineral villiaumite, in very small quantities. Sodium fluoride is widely used as a fluorinating agent in toothpastes and water supplies to maintain dental health. It is also used as a wood preservative, corrosion inhibitor, cleaning agent, insecticide, chemical reagent, and in metallurgy and glass industries. Another important application is in nuclear medical imaging, where radioactive sodium fluoride (NaF18) is used as a radiotracer for detecting various conditions. As a kind of alkali halide crystal, sodium fluoride single crystal has a wide range of optical tansmission, but it has not been paid much attention because it is inferior to other crystals (such as calcium fluoride, magnesium fluoride, etc.) in mechanical properties and corrosion resistance In recent years, with the continuous progress in the application of color centers in crystal materials, sodium fluoride crystal has become a remarkable crystal material. 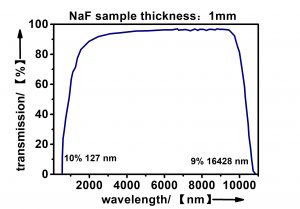 Get Connected with us